Wave degree refers to the relative time frame that a given wave or pattern belongs to within a wave count. For example, a pattern that extends over a few days would generally be at a smaller/lower degree than one that extends over several weeks.

However, wave degree is a relative term, so don’t worry too much about choosing the “right” one. Whether or not you have a specific scenario in mind when drawing waves manually, it’s usually best to start a with a degree near the middle of the range (e.g., Primary), so that you have space to add waves at higher and lower degrees as you work through your analysis.

Also, one of the unique features of WaveBasis is that, if you prefer, you can simply focus on the Wave Family, and let the software manage wave degrees automatically. So, as you add new wave patterns to a chart, WaveBasis will keep the relative degrees organized properly for you. 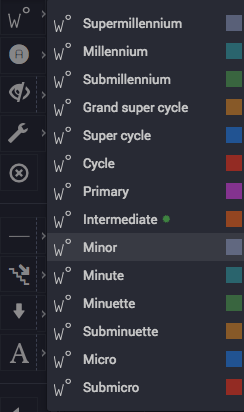 Was this article helpful? Yes 8 No 2