There are a number of ways to interact with and modify wave patterns and counts after they have been added to a chart. From repositioning waves by drag-and-drop to changing entire patterns, there are virtually no limitations to how waves can be modified to suit your analysis objectives. This is particularly important and useful for more experienced Elliott Wave analysts and traders.

Additionally, there are a number of wave and pattern operations that can be accessed by right-clicking on any wave and selecting from the menu that appears, as described below.

If you right-click on any wave, a menu will open with options for modifying or deleting that wave or the entire wave pattern. 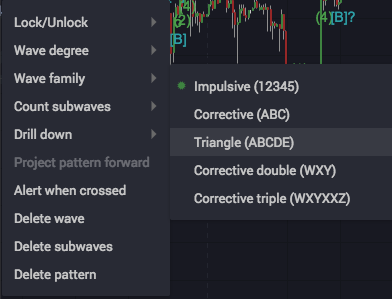 The menu options are explained below:

By default, Smart Tools only display when you are hovering your mouse over a particular wave. Use the Lock/Unlock feature to lock a given Smart Tool chart enhancement or all enabled Smart Tools onto the chart. For example, it’s often convenient to lock Support/Resistance areas or Fibonacci Levels in place on a chart as you proceed through an analysis.

Use this to change the degree of a wave pattern. See also Choosing a wave degree.

Use this to change a wave pattern’s family or “type”. This is useful for examining alternative possibilities for an existing pattern.

For example, suppose waves 1, 2 and 3 of a potential impulse have completed. In that case, it is often worthwhile to evaluate the possibility that those waves could actually be the A-B-C of a zigzag pattern. In this case, you would change the wave family to Corrective and then inspect the integrity of the alternate pattern using tools such as the Smart Tools.

Use this to automatically detect lower-degree subwaves between existing waves in a pattern or at the end of an incomplete wave pattern. See also Counting Subwaves.

Use this to automatically detect wave patterns on a lower timeframe between existing waves in a pattern or at the end of an incomplete pattern. See also Timeframe Drilldown.

Use this to project waves for incomplete patterns into the future. This is a powerful way to establish a forecast guideline for the probable path that price may follow based on an existing partial pattern. Using standard Elliott Wave expectations and statistical modelling, waves will be added to the chart to complete the incomplete pattern. While the price levels in a projected forecast are based on objective probabilities, manual adjustments for timing are often required based on current market conditions. This feature is only enabled for incomplete patterns.

This is a way to quickly set a price alert based on price crossing through a specific wave level. See also Setting Alerts and the Alerts gadget.

Use this to delete a wave (and any waves that follow) from an existing pattern.

Use this to delete all lower-degree subwaves that follow a given wave.

Select this option from any wave in a pattern to remove the entire pattern from the chart.

Was this article helpful? Yes 8 No 1