Where should I start an Elliott Wave count?

Where to begin an Elliott Wave analysis is the single most important decision you can make before creating a wave count. This is true whether you create a wave count manually or use the automatic wave counting tools that are built into WaveBasis. And, it’s the most important parameter that you can set before computing an automatic wave count on the WaveBasis platform. This is an aspect of Elliott Wave analysis that many new practitioners struggle with or overlook completely. It’s also one of the most common points of confusion for those who are new to WaveBasis.

The problem is that there is no perfectly “right” answer. Where you start a wave count will depend on your trading objective(s) and which phase of the analysis process you’re in. However, you’ll generally get the best results by starting counts at the beginning of a specific and meaningful market turning point, rather than in the middle of a market rally or decline.

Every wave count analysis should start with a question that you want to know the answer to.

For example, if you’re just beginning a new analysis and trying to determine the long term context of a market, you might start at the beginning of the most recent longer term rally or decline. Or, you might begin by analyzing the entire history of a market on a weekly or monthly chart. However, if you’re refining your analysis to devise a more immediate price forecast, you might begin at the last local pivot or swing point.

So, deciding where to start a wave count analysis depends on the question you are asking. Are you asking “what is the long term context of this market?”, “what is the long term forecast for this market”, or are you asking something like “is there a short term potential trade opportunity?”, as a few examples. You should get clear about this before selecting a date range.

One way to think of choosing the beginning point of a wave count is to imagine that you’re going to show a range of a chart to a colleague to ask his or her trading opinion. Or, perhaps you’re showing that range to another Elliott Wave analyst to ask for a wave count. In both cases, you’d probably show enough of the chart so that your colleagues can have a basic sense of “where we are” in the context of past market action. The best way to do that would be to include in the chart range at least the last “meaningful” turning point in the market, where what is meaningful is dependent on the time frame that you are most interested in.

From this perspective, WaveBasis is not much different than your colleagues. When you choose a beginning point for an automatic wave count, you are choosing how much of the chart you want to “show” to WaveBasis to produce the wave count. So, you should be thoughtful to include enough of the chart to make clear which market context you are most interested in. For example, selecting a date range that only “shows” the middle and the end of a market move without the beginning is not likely to yield very good results.

The start of a wave count should always align with a meaningful market turning point. Always, no exceptions.

It’s important to remember that Elliott Wave counts are intended to identify patterns that exist over the duration of “a market move”, where a “market move” is dependent on a given timeframe (1-day, 1-hour, etc), and it has a beginning, middle, and end. These patterns and sub-patterns are tied to the underlying crowd psychology of the market’s participants at the various phases of a market rally or decline.

Further, a wave count that describes a given market move establishes a context for the market, which is the key foundation for making relevant and reliable forecasts. And in turn, the date range that defines the start and end of the wave count is critical for establishing a meaningful and relevant context.

While WaveBasis includes the ability to define a Date Range based on a fixed number of price bars, it also includes unique features like Automatic Pivot Detection that help make the decision of where to start a wave count much easier. So, for best results it’s strongly recommended that you are thoughtful and deliberate about where your wave counts start, using the tools included in the platform which are designed to make this process efficient and natural. 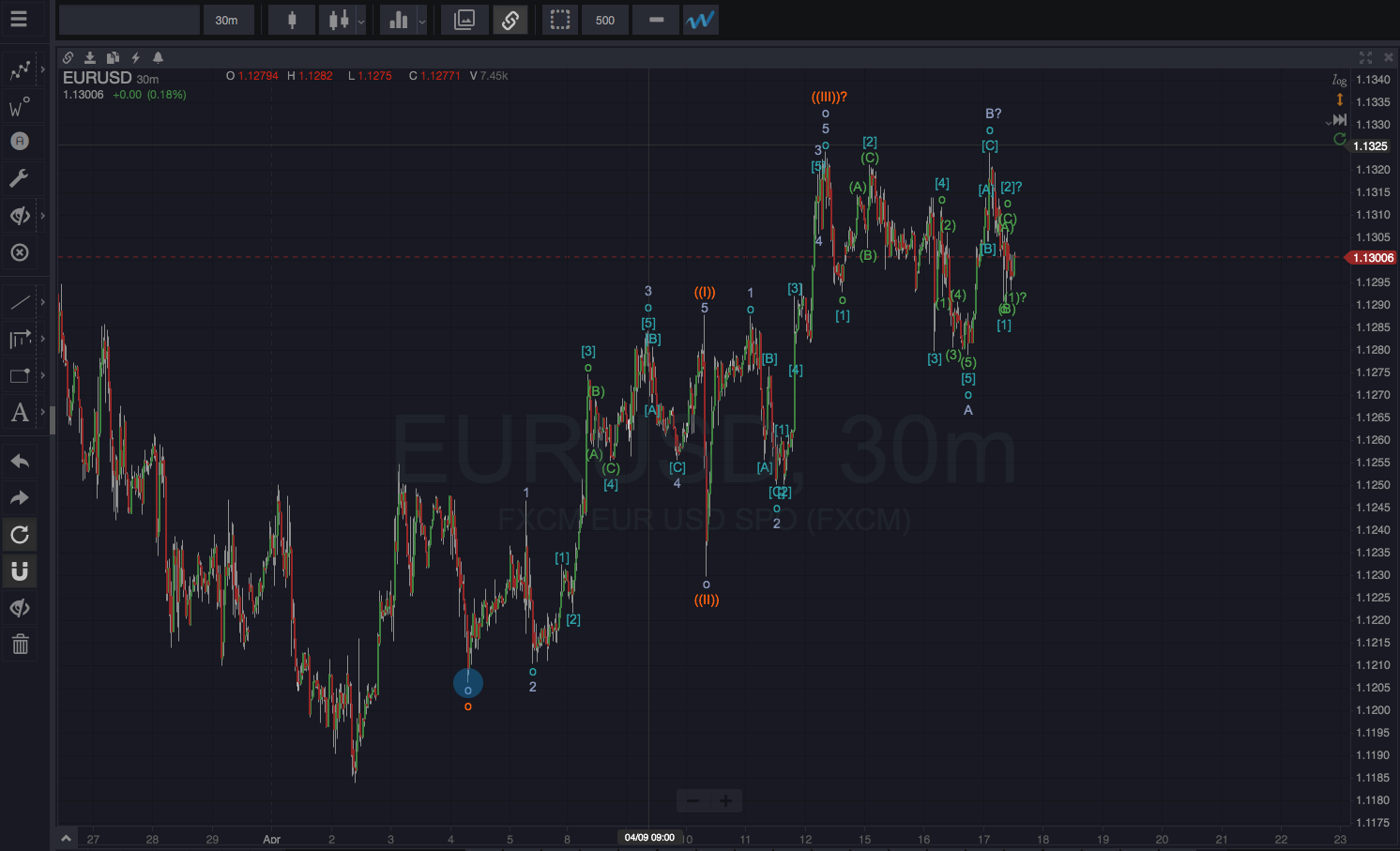 This first chart above shows the results of an automatic wave count using the “Last 500 bars” date range setting. As you can see by the “Blue Dot” Autocount Start indicator, the count was computed beginning with the low on 4-April,  since that low was the most meaningful turning point in the last 500 bars of trading.

However, we can also see in the chart that the EURUSD rally actually started from the low on 2-April, when the short term trend changed. So, by fixing the range at 500 bars, we have effectively excluded the beginning of the rally from the automatic wave count computation. We’ve asked for a wave count on an arbitrary section of the chart that begins after the true beginning of the rally.

In doing this we’ve essentially defined an arbitrary context for the rally that is described by the wave count. So, while a count with a beginning, middle, and end was labelled on the chart, it doesn’t align with the underlying price activity.

If we define an arbitrary context because of a carelessly selected date range, then we can generally expect that the results will be fairly arbitrary. “Garbage in, garbage out”. 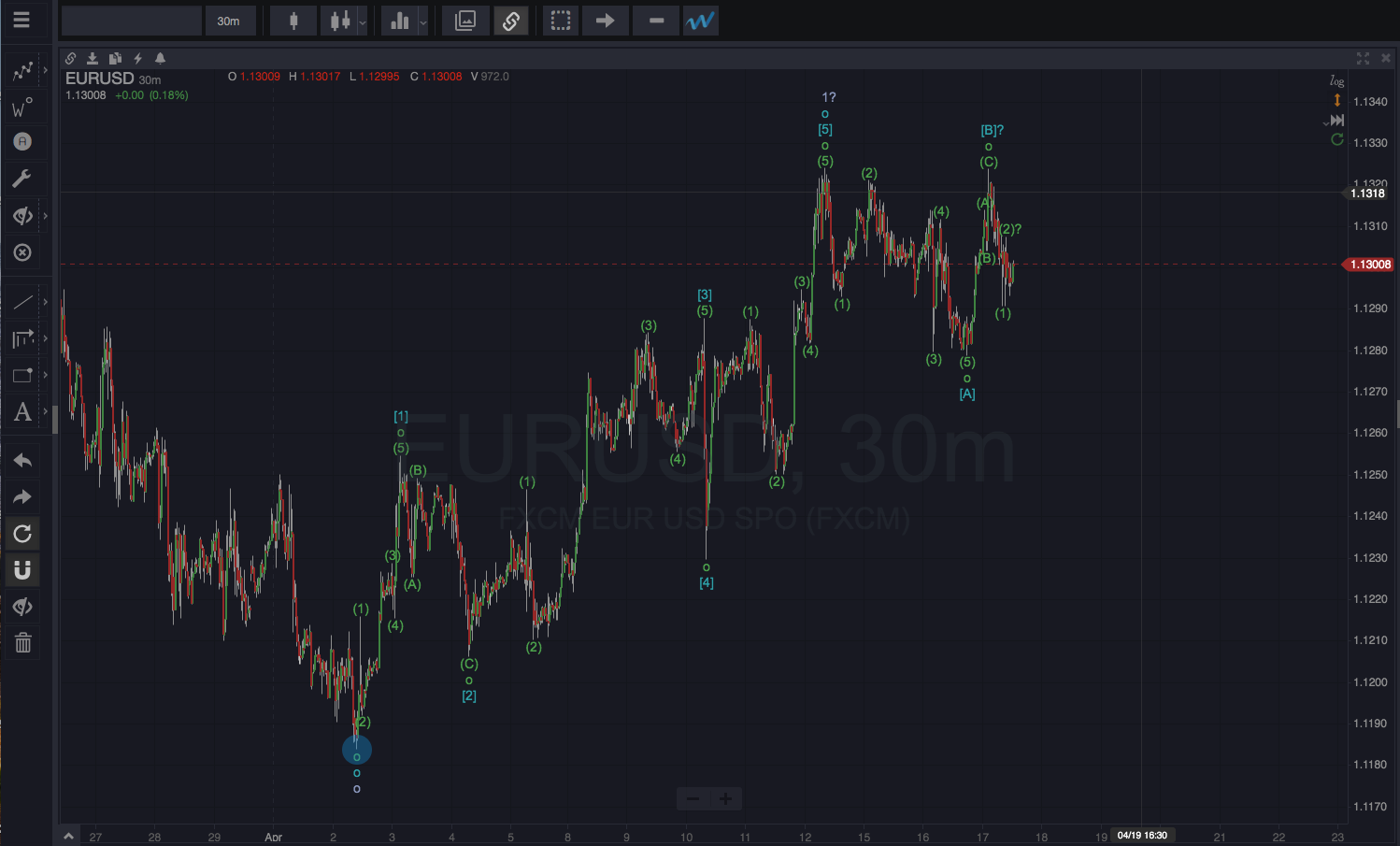 This second chart above shows the results of computing an automatic wave count using the “Up to the present” date range setting, combined with the “Autocount Start” Smart Tool. This indicates that the wave count is computed beginning with the 2-April low (again, as indicated by the “Blue Dot”). In this case, the Elliott Wave count is aligned with the beginning of the rally. This is a “proper” wave count.

So, this second count defines a reasonable context for the market from the 2-April low up to the to the present. So, any resulting forecasts for upcoming highest-probability support/resistance, or projected price targets can be considered sound trading decision support from an Elliott Wave analysis perspective, not arbitrary as in the first chart.

This is not much different than if you were showing the chart to a friend or colleague to ask for an opinion. You would most likely make sure that you at least showed them that the 30-minute trend changed on 2-April, if you hoped to get a sensible and relevant perspective from them.

When you select a date range you are deciding what to “show” to the automatic wave count engine, and you are asking the question: “based on what I’m showing you, what is the highest probability way to construct an Elliott Wave count, and what does that wave count suggest about what will likely happen in the future, statistically speaking?”. 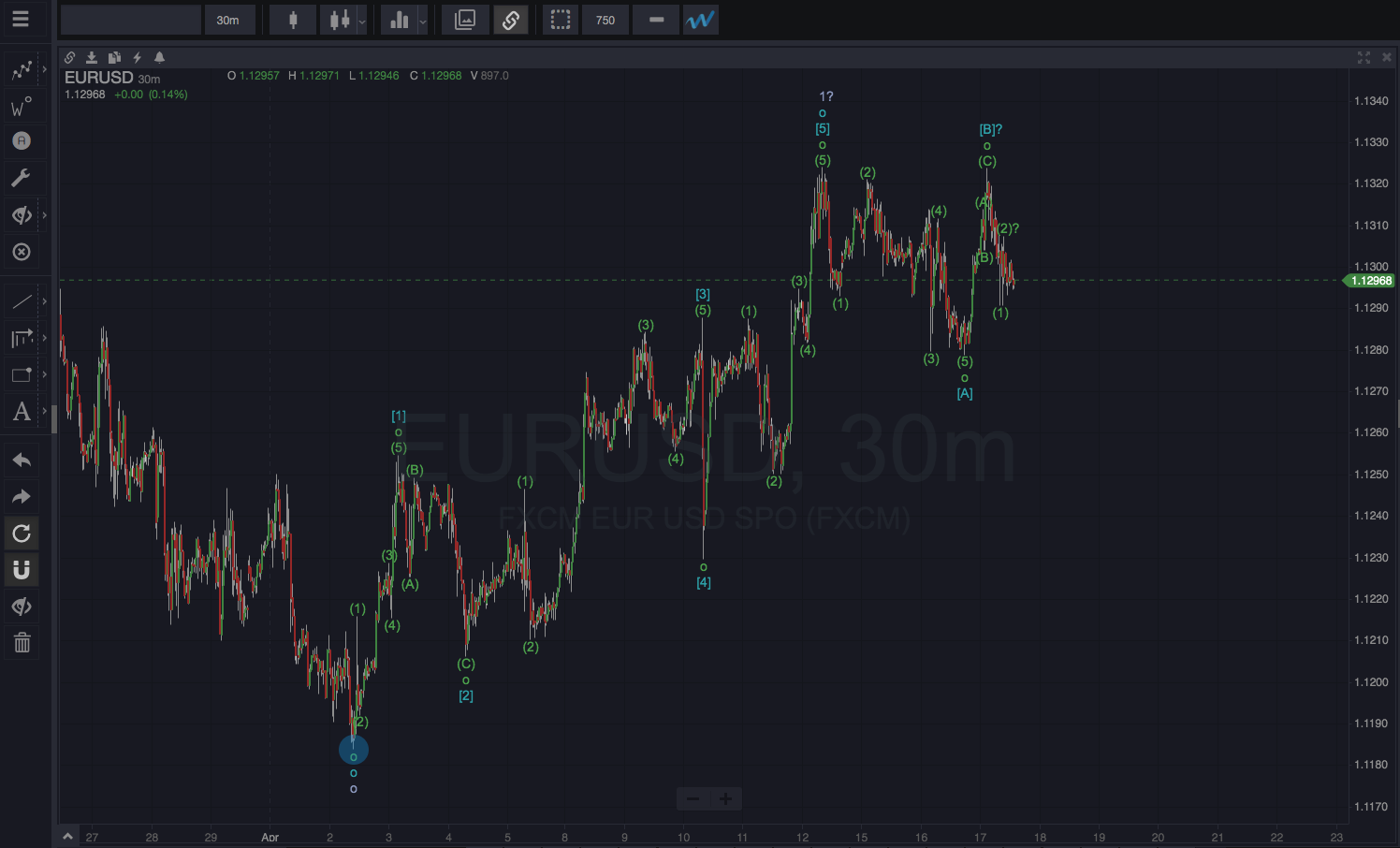 So, why do we even provide a fixed number of bars date range option?

This third chart above shows the identical wave count as shown in the second chart. Both display a “proper” wave count. The difference is that the selected date range setting in this third chart is “Last 750 bars”.

So, in this case we “got lucky” because the most meaningful market turning point happened to occur within the last 750 bars. However, obviously this won’t always be the case, and you don’t want to simply rely on luck. For example, if the start of the rally in the chart above had happened just a few bars earlier, then it wouldn’t have been included in the wave count computation, and the wave count would not be very reliable.

Being deliberate about where an automatic wave count will start, as described in the sections above, requires that you manipulate the chart (using pan/zoom) so that the most meaningful turning point is visible on the chart. Because of this it’s a bit more difficult to quickly look through a list of markets for potential trading opportunities.

Setting a fixed number of bars as your date range will allow you to more quickly assess a group of markets without manipulating charts at all – when Automatically Count Charts is enabled. Once Automatically Count Charts is enabled, you can simply type the desired market symbol and/or resolution into the chart using the symbol/resolution shortcut and automatic wave counts will be calculated…automatically. The same thing can be accomplished by clicking symbols in a watchlist.

However, using this technique to quickly assess a list of symbols should only be considered a starting point for your analysis.

Once you’ve identified a potential trading opportunity, you should always evaluate it more closely by reviewing how the wave count aligns with the beginning, middle, and end of the underlying market’s actual price action. This might sometimes involve running an additional wave count(s), being thoughtful and deliberate in selecting a meaningful date range.

We’ve seen far too many users who are learning to use Elliott Wave analysis in their trading make the same mistake: starting wave counts in the middle of market rallies or declines. This can lead to confusing or conflicting results, or wave counts that change in unexpected ways as new market data arrives. Don’t make that mistake.

Hopefully, this post will help you be a more happy and profitable trader who is applying Elliott Wave analysis in the right way!