If you’ve ever reached out to us for support, you’ve probably discovered how enthusiastic and knowledgable our support staff are. That’s because everyone on our support staff is actually a trader themselves. Our mission is to make traders happier and more successful. So, our support staff often go well above and beyond the call of duty to help our users learn to use the WaveBasis platform in the best ways for their particular trading style and objectives.

Here’s one trader’s response to his experience with our support staff:

“Thanks, you guys are truly the best! Excellent software and superior customer service. “

We work hard to provide the personal attention our traders deserve, and of course we love the positive feedback!

Support desk discussions often involve detailed explanations and example analyses that can sometimes even include include charts. We realized that many of these discussions can perhaps help guide other users along the path to Elliott Wave and WaveBasis greatness. So, we’ve decided to publish the most important parts of some of these discussions here on our blog periodically, in order to spread the love and knowledge.

The first of these behind-the-scenes discussions is shared below. This is an actual question from an actual subscriber, and the actual reply that he received. Enjoy!

“Another piece I am confused on is which waves are more likely to be fulfilled. You have the minor, intermediate, primary etc…. does it fulfill the smallest time frame with more certainty or not?”

Keeping in mind the old trading expression “sometimes the best trade is no trade”, one of the things that you should look for as an Elliott Wave analyst is “clarity” in a wave count – before you risk any capital on a trade. If a particular analysis doesn’t produce enough clarity, an experienced EW analyst will move on to another market, and/or continue tracking the wave count “until clarity emerges”, which is a very common expression.
​
There are a number of things that can contribute to wave count clarity, however, in the specific context of your question, clarity generally comes in the form of what is referred to as “confluence” between wave degrees. In other words, projections at different wave degrees shouldn’t be viewed as competing for which one is more “right”, what you’re looking for is for them to express some level of agreement – this is the most effective way to tilt the probabilities more in your favor.

The easiest way to identify this type of confluence in WaveBasis is by paying close attention to the projected support and resistance areas displayed by the Smart Tools. For clarity, these areas are not “predictions”, they are objective, probability-based information which is based on commonly accepted Elliott Wave expectations, combined with our internal research and statistical analysis. They can provide an excellent guideline for where to expect market turning points to take place, once you’ve settled on the correct wave count.

Also, checking to see how well a wave count has “played by the probabilities” over the course of its history is an effective way to verify that you’re tracking the correct wave count in the first place.

As an example of both confluence and the effectiveness of the high-probability support and resistance zones in WaveBasis, I’ve included a wave count that I am currently tracking for one of the markets that I trade, GBTC. You can find the chart here: https://app.wavebasis.com/chartimg/aBXrFDHeakBbbuBP
​ 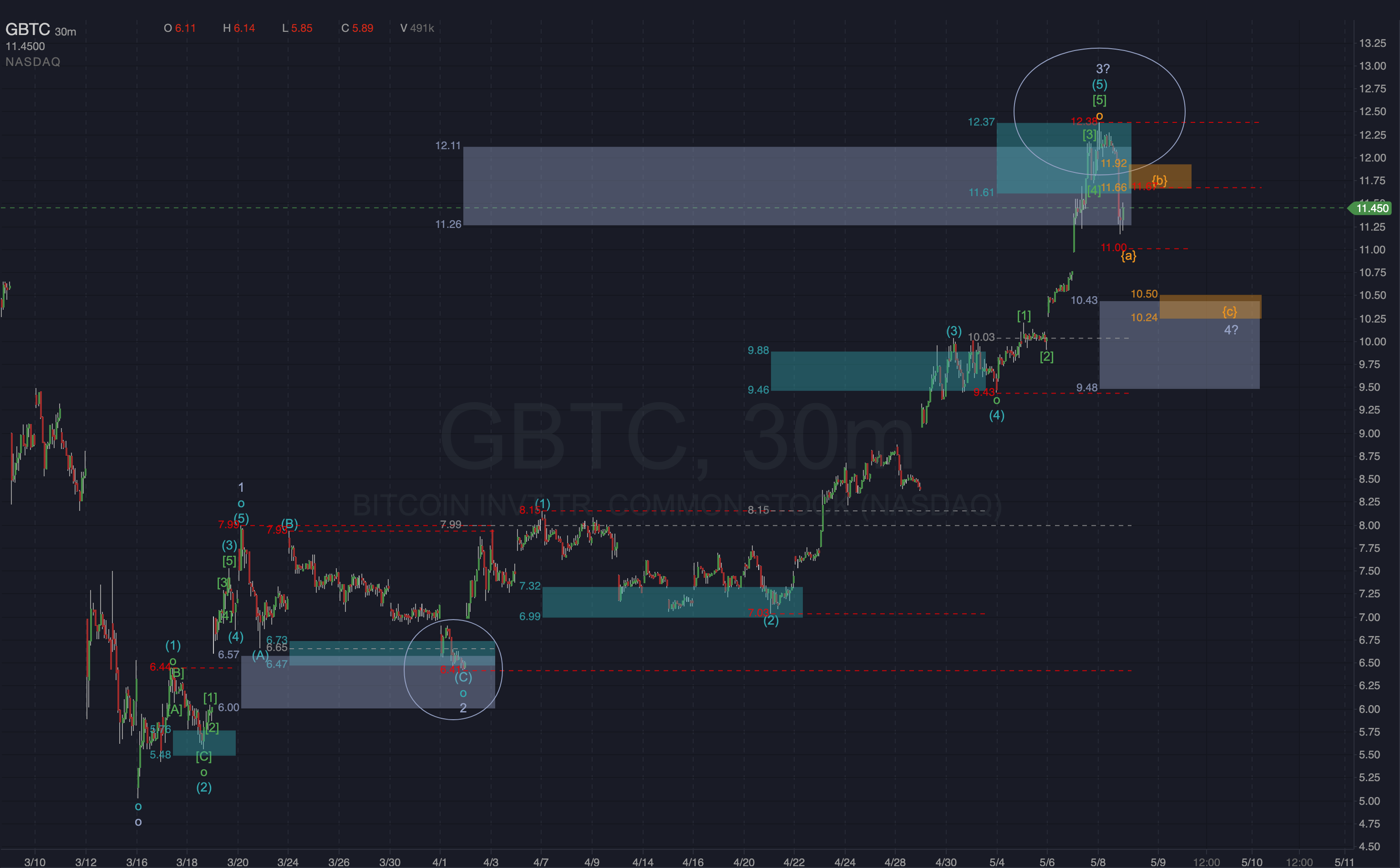 For some context, I’m an active cryptocurrency trader, and I use GBTC as a primarily buy/hold investment in a traditional portfolio.

As you can see on that chart, the wave count highlights several potential past trading opportunities, as indicated by the colored support and resistance areas. The colored support and resistance areas overlap where different wave degrees are pointing to the same target areas. This is an example of confluence. In my particular case, I’ve used this count for 2 recent trades that I’ve circled on the chart:

As indicated in the chart, I’m now planning to buy back what I just sold in the $10 area, after an ABC correction. This is the beauty of Elliott Wave analysis. However, since probabilities aren’t perfect, confluences and support/resistance targets don’t always work this perfectly, but they tend to provide a quite reliable framework for staying on the right side of the probabilities.
​
Obviously, I’ll keep tracking this wave count and trading the opportunities as they present themselves. Additionally, I won’t recalculate the count until something appears to go wrong with it (or I need to widen my lens to a higher timeframe). This count is playing by the probabilities exceptionally well, so instead of recalculating the entire count, I’ll use tools like Count Subwaves, and Timeframe Drilldown, along with manually adding waves to the end of the count and using Project Pattern Forward. This approach will help me to make sense of new price action as it evolves.  You can see an example of this with the yellow ABC hypothesis on the chart above. If I get a properly structured (5-3-5) ABC correction that terminates in the $10 area, for example, bingo.

With all of this in mind, hopefully it’s becoming clear that automatic wave counts are not intended (or advertised) as a replacement for best-practiced Elliott Wave analysis. The various automated tools included in the WaveBasis platform make the process of applying the Elliott Wave approach faster, easier, and more precise than it has ever been.  WaveBasis does most of the time-consuming and tedious work for you automatically, but it doesn’t do all of the work for you. Life and trading simply isn’t that easy.
​
Traders who do best with the platform generally know something about what they’re doing. A hammer and some wood in the hands of some people might get you a house, with some other people, you’ll just get a mess. So you’re on the right track by inquiring about how to learn and best practice the underlying fundamentals of the approach. I don’t know how I ever lived without EW analysis and WaveBasis.