The Problem with Fibonacci Levels

Fibonacci ratios are everywhere in the world of trading, whether you trade forex, cryptos, stocks, futures, or “other”. It’s very common for traders to rely on key Fibonacci extension and retracement levels in their trading. Also, it’s well known that Fibonacci ratios are a particularly important aspect of Elliott Wave trading.

However, unless you’re using WaveBasis, it’s likely that the Fibonacci levels you’re following are often arbitrary and plain wrong. They’re probably not telling you what you think they are.

Many traders don’t realize that there’s more than one way to calculate Fibonacci extension and retracement levels. And, the unfortunate reality is that the calculations for extensions and retracements on most platforms are seriously flawed. Flawed Fibonacci calculations can cause you to make bad trading decisions and can prevent you from successfully applying the Elliott Wave approach.

So we thought we’d explain how WaveBasis calculates Fibonacci extension and retracement levels and why.

WaveBasis calculates Fibonacci extension and retracement levels based on the percentage changes of market price moves. This is the most mathematically sound and meaningful way to measure retracements and extensions in general, and this is particularly true for long-term charts.

Most importantly, calculating Fibonacci levels based on percentages is a requirement for practicing Elliott Wave analysis properly and producing consistently valid wave counts.

Unfortunately, however, most platforms don’t calculate Fibonacci retracement and extension levels based on percentages. This leads many Elliott Wave analysts to produce invalid or improbable wave counts. The internet is full of them.

It’s also important to note that using percentages to measure Elliott Waves is consistent with the relevant and most respected Elliott Wave literature. Both the Ralph Nelson Elliott and Frost/Prechter books mention that the sizes of Elliott Waves must be compared based on percentage changes.

Both the manual Fibonacci tools and the automated Smart Tools in WaveBasis use the same percentage-based extension and retracement calculations.

Calculating Fibonacci levels using percentages is also one of the reasons the WaveBasis Smart Support/Resistance levels are so effective.

Why does this matter? An example

One of the most essential Elliott Wave rules is:

Unfortunately, many Elliott Wave traders never think to ask themselves this important question. Most folks tend to simply rely on the Fibonacci extensions on their charting platform (or their eyes alone) to compare wave 3 to waves 1 and 5. Often, however, they are relying on false or misleading information.

However, there’s a very simple answer to this question…

Price move “A” is shorter than price move “B” if the percentage change of A is less than that of B.

So, to be sure that wave 3 is not shorter than wave 1, for example, wave 3 must represent a larger percentage change in price than wave 1. Hopefully, this is obvious at this point.

So, if an extension tool doesn’t use price percentage changes to calculate extension levels, it will not tell you with consistency and certainty if wave 3 is longer or shorter than wave 1. This affects all markets, timeframes, and time ranges but can be particularly problematic on long-term charts as we will see in the example below.

Using percentages to measure and compare waves is the only approach that allows you to confidently comply with all of the Elliott Wave rules. So, it’s an essential aspect of producing consistently valid Elliott Wave counts. We think this matters…a lot.

This example focuses on the calculation of extension levels, however, the same principles also apply to retracements.

Traders occasionally reach out to us if they notice that the Fibonacci levels displayed in WaveBasis are different than what they see on another platform. The example chart below is an actual chart from another platform that was sent by one of our customers to show us what he had noticed.

This is a great example of why using percentages to calculate Fibonacci extensions is critically important.

So, we would naturally conclude that rally B is not shorter than rally A, therefore we might label rally A as a wave 1, and rally B as a wave 3 like this:

This conclusion also aligns with what we can see just by looking at the chart. Wave 3 definitely looks like it’s longer than wave 1.

However, when we look more closely at the actual trade data, the chart tells a different story as discussed below. 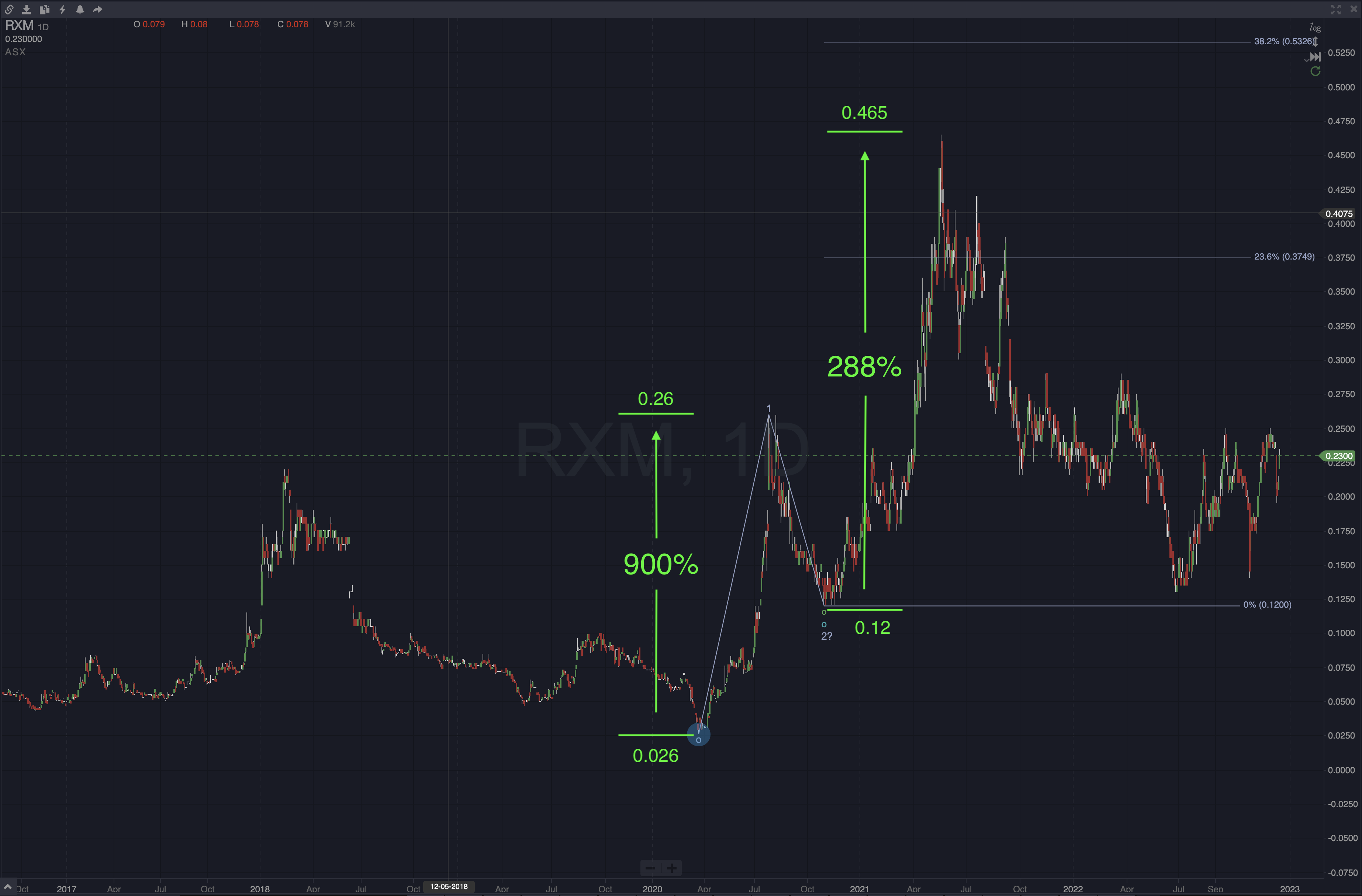 In reality, rally B is actually much shorter than rally A.

Based on the Fibonacci levels displayed by WaveBasis in the above chart, you can see that rally B ended just above the 23.6% (0.236) extension. More precisely, rally B ended at the 32% (0.32) extension because:

So, if you rely on the Fibonacci extensions in the first RXM chart above (or your eyes alone) you would falsely conclude that rally B was longer than rally A. Those Fibonacci levels don’t provide any useful information about the relative sizes of the two rallies.

Hopefully, you can see how this would adversely affect your analysis. This problem causes many traders to produce invalid or improbable wave counts, for example. The internet is full of them.

However, if you rely on the Fibonacci levels displayed in the WaveBasis chart above, you will know the truth: Rally B is much shorter than rally A. This will put you on a solid footing and allow you to advance your analysis with clarity and confidence.

What about logarithmic scale charts?

Fibonacci extension and retracement levels in WaveBasis are always the same, whether or not the chart is in log scale, as it should be.

Log scale charts use percentage changes to display the price scale. So, traders who use log scale charts implicitly understand that comparing price moves (or waves) based on percentages makes the most sense.

But how do you know when your Fibonacci tool is going to break down and become useless?

How do you know when you should switch to log scale to understand a chart?

Unfortunately, there’s no easy way to know with certainty. So, it doesn’t seem wise to risk your trading capital based on a Fibonacci tool that might be providing false information without your awareness.

The good news is that WaveBasis has already solved this problem, so you don’t even have to think about it.

Some traders also mistakenly believe that switching a chart to log scale actually changes the relative sizes of price moves. This leads them to expect to see a different set of Fibonacci levels when a chart is in log scale. So, some platforms give you the option to use different calculations to display a different set of Fib levels when your chart is in log scale. This can lead to a scenario where sometimes rally A is shorter than rally B, but sometimes it’s not, depending on how you configure your chart.

We call this “magical thinking”.

The point is that measuring and comparing real-world price moves has nothing to do with what is happening on your computer screen or how you adjust or distort the display of your charts. Unfortunately, we don’t get to decide how price moves compare to each other by clicking buttons on a computer screen.

The market has already decided what the sizes of price moves are and how they compare to each other, and it is written in stone. So, the WaveBasis Fibonacci tools just reflect the concrete market reality, automatically, all the time.

Intellectual honesty demands that we leave open the possibility that platforms that put mysterious Fibonacci lines on charts and allow you to play visual games with price scales might yield successful trading methodologies. However, we can say definitively that this approach is detrimental to the proper and successful practice of Elliott Wave analysis.

What is the purpose of a Fibonacci extension/retracement tool?

Most more experienced traders are already familiar with Fibonacci retracement and extension tools. Here’s a brief summary for newer traders.

In the simplest of terms, a Fibonacci extension or retracement tool is used to compare the sizes of two successive price movements on a chart. An extension tool is used to compare price moves that are in the same direction during a particular rally or trend. This is useful for assessing the continuation of a trend after an initial rally that is followed by a correction as in the RXM example above.

The retracement tool is used to compare moves that travel in opposite directions such as when a market drops in a correction immediately after a rally. This is useful for assessing how far a market has dropped relative to a rally, after the rally has ended, for example.

The comparison between the price moves is most typically expressed as a ratio or a percentage, and price levels that correspond to the various ratios/percentages are plotted on a chart as shown in the charts above.

Taking note of how the size of one price move compares to another in relation to key Fibonacci ratios is an important component of many trading strategies, including Elliott Wave analysis.

NOTE: Some platforms use the term “expansion” instead of “extension”

NOTE: The historical origins and various uses of Fibonacci ratios in trading are beyond the scope of this article.

It’s also worth noting that a typical Fibonacci extension or retracement tool is actually not very closely related to Fibonacci concepts or mathematics at all. So, the name of the tool is a bit misleading. Most of the levels indicated by a typical Fibonacci extension/retracement tool are not actually Fibonacci ratios, for example, 0.5 and 1.0. Most other commonly used ratios are interesting transformations of the golden ratio.

So again, despite the magical-sounding name, the central purpose of a so-called “Fibonacci” extension/retracement tool is simply to allow traders to easily compare the sizes of separate and distinct price moves.

How should I handle this problem?

The next time you find yourself looking at Fibonacci levels on a platform that doesn’t use percentages to calculate the levels you might wonder whether or not you’re seeing the truth or whether you’ve just become a victim of magical thinking.

So, if your platform doesn’t calculate extension and retracement levels based on percentages, you have a few options: Calculate them correctly yourself the way that Ralph Nelson Elliott did in the 1920’s, find a platform that uses percentages…or…just use WaveBasis.

Sign up for a 14-day free trial if you don’t already have a WaveBasis account and as always, Happy Trading!